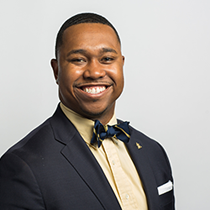 Rohan is director of admission at George School (PA), where he is an alum.

Rohan is a founding member of the National Diversity Practitioners Institute (NDPI). He also serves as chair of the faculty search committee for the annual National Association of Independent Schools (NAIS) Student Diversity Leadership Conference (SDLC). After graduating from George School, Rohan earned a Bachelor of Arts from Temple University in African-American studies with a minor in history. While at Temple, Rohan was initiated into the Lambda Chapter of Kappa Alpha Psi Fraternity, Inc. In July of 2015, Rohan received a Master of Science in education for school leadership from the University of Pennsylvania.

In addition to his role in the admission office at St. Mark’s, Rohan was an academic advisor, advisor of the Students Heightening Awareness of Diversity, Equality, and Service Affinity Group (S.H.A.D.E.S), health teacher, assistant varsity football coach, and a house parent. Rohan is a native of Jamaica, where he lived in Tivoli Gardens until the age of seven.